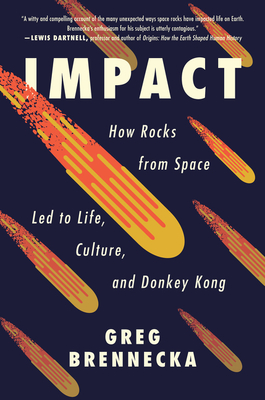 A Short History of Nearly Everything meets Astrophysics for People in a Hurry in this humorous, accessible exploration of how meteorites have helped not only build our planet but steered the evolution of life and human culture.

The Solar System. Dinosaurs. Donkey Kong. What is the missing link? Surprisingly enough, it's meteorites. They explain our past, constructed our present, and could define our future.

Impact argues that Earth would be a lifeless, inhospitable piece of rock without being fortuitously assaulted with meteorites throughout the history of the planet. These bombardments transformed Earth’s early atmosphere and delivered the complex organic molecules that allowed life to develop on our planet. While meteorites have provided the raw materials for life to thrive, they have radically devastated life as well, most famously killing off the dinosaurs and paving the way for humans to evolve to where we are today.

As noted meteoriticist Greg Brennecka explains, meteorites did not just set us on the path to becoming human, they helped direct the development of human culture. Meteorites have influenced humanity since the start of civilization. Over the centuries, meteorite falls and other cosmic cinema have started (and stopped) wars, terrified millions, and inspired religions throughout the world.

With humor and an infectious enthusiasm, Brennecka reveals previously untold but important stories sure to delight and inform readers about the most important rocks on Earth.

Greg Brennecka, PhD is a staff scientist and cosmochemist at Lawrence Livermore National Laboratory. After his doctoral work at Arizona State University, Greg received the prestigious Sofja Kovalevskaja fellowship from the Alexander von Humboldt Foundation to study the early Solar System at the Institute for Planetology in Münster, Germany, where he led the “Solar System Forensics” group for five years. His research has appeared in Science, Nature, and Proceedings of the National Academy of Science. Greg lives in the Livermore Valley wine country and fully enjoys the local flavors.

"A witty and compelling account of the many unexpected ways space rocks have impacted life on Earth. Brennecka's enthusiasm for his subject is utterly contagious." — Lewis Dartnell, professor and author of Origins: How the Earth Shaped Human History

"In this highly entertaining book, filled with informative and humorous charts, diagrams, and images...Brennecka's enthusiasm for meteorites will appeal to experts and novices alike." — Kirkus Reviews

“Brennecka successfully tackles a niche corner of the popular science genre where anthropology meets astrophysics. His knowledge and wit come together in an excellent debut that will appeal to readers of Munroe, Neil deGrasse Tyson, and Carl Sagan.” — Library Journal

“Meteoriticist Brennecka explains all things meteor to the layperson with enthusiasm and humor. He blends a thorough explanation of meteorites with pop culture references that make Impact enjoyable and easy to read.” — Booklist

"Greg Brennecka is a meteoriticist with a sense of humor and a flair for making complex topics both understandable and entertaining. While the scope of Impact is impressive and far-reaching, Brennecka’s clear, succinct narrative style makes for fascinating reading throughout." — BookPage (starred review)

“Brennecka demonstrates with irrepressible enthusiasm how much we have learned about the universe from analyzing the space rocks that fall to Earth.” — Wall Street Journal