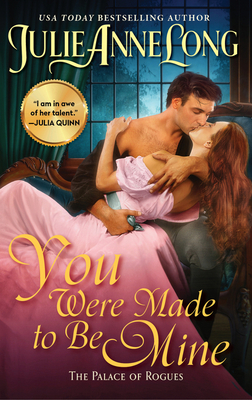 This is book number 5 in the The Palace of Rogues series.

"I am in awe of her talent."— Julia Quinn

In the fifth installment of USA Today bestselling author Julie Anne Long’s charming Palace of Rogues series, a rakish spy finds more than he bargained for in his pursuit of an earl’s enchanting runaway fiancée.

The mission: Find the Earl of Brundage’s runaway fiancée in exchange for a fortune. Child’s play for legendary British former spymaster, Christian Hawkes. The catch? Hawkes knows in his bones that Brundage is the traitor to England who landed him in a brutal French prison. Hawkes is destitute, the earl is desperate, and a bargain is struck.

Fleeing a savagely shattered dream, the sheltered Lady Aurelie Capet finds refuge in an alias and the warmth and kindness of the Grand Palace on the Thames—until a gorgeous, mysterious disturbance to her peace literally topples through the door.

An unexpected, fierce desire that feels destined, dangerous—and devastatingly sweet—ignites between the sheltered beauty and the jaded spy, and as they slowly unravel each other's shocking secrets Hawkes closes in on the truth about the earl. Soon it’s clear they can have no future without vanquishing the past: Hawkes knows that loving her means avenging her. Aurelie knows that loving Hawkes means freeing him to do that, no matter the cost.

Long enhances her complex narrative—loaded with wit, mystery, and sizzling romance—with attention to historical detail and the emotional depths of her characters. This may be the author’s best yet. — Poets & Writers (starred review)

“Long finds that delectable sweet spot with Angel in a Devil’s Arms, welcoming us all to the cozy warmth of the Grand Palace on the Thames with the peculiar blend of humor and pathos she writes with such aplomb.” — Entertainment Weekly

“Each of the brilliantly written entries in Long’s Palace of Rogues series is master class in how to successfully marry stunning sensuality with scintillating wit, and the fifth entry is no exception with its resplendent prose, impeccable plotting, and perfect-for-each-other protagonists.” — Booklist (starred review)

“Deploying her usual perfectly calibrated mix of irresistibly dry wit and superbly nuanced characterization, RITA Award-winning Long adds another winner to her Palace of Rogues series with this lushly sensual, exquisitely emotional, and gracefully written tale about two people desperately trying not to fall in love with each other.”
— Booklist (starred review) for Angel in a Devil’s Arms

“Delightful...refreshing. Readers will enjoy this rich depiction of how the past informs but does not dictate the future.”
—  Publishers Weekly for Angel in a Devil’s Arms