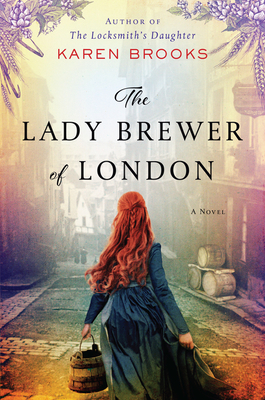 An unforgettable historical tale set in fifteenth-century England of a brilliant woman’s defiance, courage, and ingenuity—from the author of The Locksmith’s Daughter and The Chocolate Maker’s Wife.

1405: The daughter of a wealthy merchant, Anneke Sheldrake suddenly finds her family bankrupted when her father’s ship is swept away at sea. Forced to find a way to provide for herself and her siblings, Anneke rejects an offer of marriage from a despised cousin and instead turns to her late mother’s family business: brewing ale.

Armed with her mother’s recipes, she then makes a bold deal with her father’s aristocratic employer, putting her home and family at risk. Thanks to her fierce determination, Anneke’s brew wins a following and begins to turn a profit. But her rise threatens some in her community and those closest to her are left to pay the price.

As Anneke slowly pieces her life together again, she finds an unlikely ally in a London brothel owner. Determined not only to reclaim her livelihood and her family, Anneke vows not to let anyone stand in the way of her forging her own destiny.

Australian-born Karen Brooks is the author of nine novels, an academic, a newspaper columnist and social comentator, and has appeared regularly on national TV and radio. Before turning to academia, she was an army officer, and dabbled in acting. She lives in Hobart, Tasmania.

“Richly atmospheric, romantic, and chock-full of period details, this fast-paced tale and its many plot twists and turns are likely to keep historical fiction fans riveted.”
— Booklist

“The daughter of a merchant flouts 15th-century English convention to start a brewery in Brooks’s illuminating epic (after The Chocolate Maker’s Wife). Brooks’s attention to historical detail instills the novel with authenticity by including many historical figures and events, while Anneke’s lively voice keeps a strong grip on the reader as she works to overcome societal prohibitions against women in business and find happiness and contentment. Brooks’s immersive page-turner does not disappoint.”
— Publishers Weekly