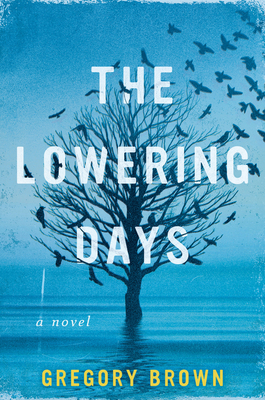 Gregory Brown’s richly textured descriptions of human nature and the beauty of the Maine wilderness are the foundation of this insightful story of a town torn between industry and the environment. Set along Maine’s Penobscot river on land claimed by the Indigenous Penobscot people, a fire at the paper mill sets residents against each other as long-held prejudices and grudges come to bear. When the publisher of the local newspaper prints a letter written by an Indigenous teen claiming responsibility for the fire, she unknowingly starts a series of events that will have long term repercussions on her family. The Lowering Days is a truly moving story made all the more powerful by the perfectly observed details that bring it to life.

“In The Lowering Days Gregory Brown gives us a lush, almost mythic portrait of a very specific place and time that feels all the more universal for its singularity. There’s magic here.” —Richard Russo, Pulitzer Prize–winning author of Empire Falls and Chances Are

A promising literary star makes his debut with this emotionally powerful saga, set in 1980s Maine, that explores family love, the power of myths and storytelling, survival and environmental exploitation, and the ties between cultural identity and the land we live on

If you paid attention, you could see the entire unfolding of human history in a story . . .

Growing up, David Almerin Ames and his brothers, Link and Simon, believed the wild patch of Maine where they lived along the Penobscot River belonged to them. Running down the state like a spine, the river shared its name with the people of the Penobscot Nation, whose ancestral territory included the entire Penobscot watershed—the land upon which the Ames family eventually made their home.

The brothers’ affinity for the natural world derives from their iconoclastic parents, Arnoux, a romantic artist and Vietnam War deserter who builds boats by hand, and Falon, an activist journalist who runs The Lowering Days, a community newspaper which gives equal voice to indigenous and white issues.

But the boys’ childhood reverie is shattered when a bankrupt paper mill, once the Penobscot Valley’s largest employer, is burned to the ground on the eve of potentially reopening. As the community grapples with the scope of the devastation, Falon receives a letter from a Penobscot teenager confessing to the crime—an act of justice for a sacred river under centuries of assault.

For the residents of the Penobscot Valley, the fire reveals a stark truth. For many, the mill is a lifeline, providing working class jobs they need to survive. Within the Penobscot Nation, the mill is a bringer of death, spewing toxic chemicals and wastewater products that poison the river’s fish and plants.

As the divide within the community widens, the building anger and resentment explodes in tragedy, wrecking the lives of David and those around him.

Evocative and atmospheric, pulsating with the rhythms of the natural world, The Lowering Days is a meditation on the flow and weight of history, the power and fragility of love, the dangerous fault lines underlying families, and the enduring land where stories are created and told.

Gregory Brown grew up along Penobscot Bay. His stories have appeared in Tin House, The Alaska Quarterly Review, Shenandoah, Epoch, and Narrative Magazine. A graduate of the Iowa Writers’ Workshop, he is the recipient of scholarships and fellowships from the MacDowell Colony and the Bread Loaf Writers' Conference. He lives in Maine with his family. The Lowering Days is his first novel.

“In The Lowering Days Gregory Brown gives us a lush, almost mythic portrait of a very specific place and time that feels all the more universal for its singularity. There’s magic here.” — Richard Russo, Pulitzer Prize–winning author of Empire Falls and Chances Are

“The Lowering Days is expansive in its scope and intimate in its details, a lyrical and sincere work by a novelist fully alive to the natural world." — Anthony Marra, New York Times bestselling author of A Constellation of Vital Phenomena

"The Lowering Days is a masterful debut, a tender and elegant meditation on the thorny bonds of family and community, the enduring trauma of environmental degradations, and the salvific power of stories. At once lyrical and spare, graceful and steely-eyed, Mr. Brown’s prose conjures the work of Louise Erdrich and Jim Harrison. Every word is a gift and a revelation, and a call for reckoning."
— Elizabeth Wetmore, author of Valentine

"Unflinching, lyrical, and timely, The Lowering Days marks the emergence of a new and authentic voice in American letters.  Brown is bona fide, a writer with incredible storytelling chops yes, but also a poet's soul, and a balladeer's heart." — Nickolas Butler, author of Shotgun Lovesongs and Little Faith

“An intimate novel about a close-knit community at the mercy of two of the world’s most implacable forces—history and nature. Gregory Brown renders the lives and landscapes of rural Maine with great power and greater compassion.” — Madhuri Vijay, author of The Far Field

“Brown stages a natural comparison: Why does each character resort to violence? Are their actions justified? How are they treated in the aftermath? The disparity quickly becomes clear: Molly must go into hiding and live off the land, while David and his family can return home safely each night.” — New York Times

"Graceful and compassionate . . . The Lowering Days [is] a flashlight into the heart of a small Maine community perched on the precipice of the Penobscot River, its future and its past." — Boston Globe

"Brown writes a fluid, lyrical prose that escorts us deep into the emotional lives of his characters." — Minneapolis Star Tribune

"Brown tells a gripping tale. And in his hands the Penobscot region of the 1980s and '90s—with its eccentric cast of Vietnam veterans, hippy fugitives, gruff lobstermen, and Penobscot tribal members—comes wonderfully to life." — Kirkus Reviews