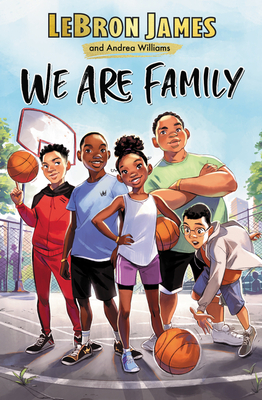 Kids have big dreams. And when those dreams are on the line, how far are they willing to go to achieve them?

When Jayden and his teammates find out there’s not going to be a Hoop Group this year—and maybe ever again—they have to learn to lean on each other if they want to save their basketball season, in this inspiring new middle grade novel from NBA superstar LeBron James and acclaimed author Andrea Williams. A New York Times bestseller!

Jayden Carr has been training all summer to be ready for Hoop Group—the free afterschool basketball program where his hero, NBA superstar Kendrick King, got his start. But when his beloved coach tells him there’s not going to be a Hoop Group this year, Jayden is heartbroken.

And he’s not the only one. Coach Beck’s daughter, Tamika, was planning to be the first girl ever to start for the squad. Chris King, Kendrick’s only nephew, spent the summer bragging that his uncle was coming home just to watch him play. For Anthony Pierson, Hoop Group was supposed to be his way out of trouble. And for Dexter Donyel, all 4’6” of him, Hoop Group was his chance to finally be part of a team, instead of just watching from the stands.

For each kid, Hoop Group was more than just a chance to ball; it was an escape, a dream, a family. Now their prospects seem all but impossible—but then the world hasn’t met Jayden, Tamika, Chris, Anthony, and Dex before. Determined to have their shot, the five new friends scrap, hustle, fight, and play hard to save their season to prove that sometimes a chance is all it takes.

The first step to winning is getting out on the court.

LeBron James is widely considered to be the best basketball player in the world and one of the greatest players of all time. James has won three NBA championships, two Olympic gold medals, and four league MVP titles. In 2017, Time magazine listed him as one of the 100 most influential people in the world. James grew up in Akron, Ohio, where he continues to create generational change through his LeBron James Family Foundation that focuses its efforts on helping youth achieve a better future through education. In 2018, his foundation opened the I PROMISE School, designed to help underprivileged students and their entire families succeed in school and beyond.

Andrea Williams is an author, journalist, and editor. Though currently residing in Nashville, Tennessee, with her husband and four children, Andrea’s heart will always remain in her hometown of Kansas City, Missouri.

"An inspiring sports story all the way to the buzzer." — Kirkus Reviews

"A book that is truly a mirror and a window—score a win for this inspiring sports story!" — Booklist