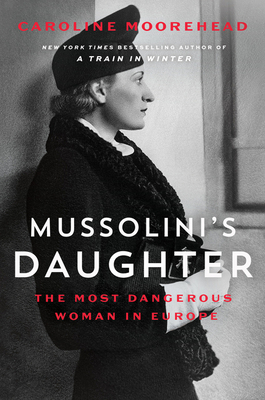 The New York Times bestselling author of the acclaimed Resistance Quartet returns with the incredible story of Mussolini’s daughter, Edda, one of the most influential women in 1930s Italy and a powerful proponent of the fascist movement.

Edda Mussolini was the Italian dictator Benito Mussolini’s oldest and favorite child. At 19, she was married to Count Galleazzo Ciano, Il Duce’s Minister for Foreign Affairs during the 1930s, the most turbulent decade in Italy’s fascist history. In the years preceding World War II, Edda ruled over Italy’s aristocratic families and the cultured and middle classes while selling Fascism on the international stage. How a young woman wielded such control is the heart of Caroline Moore’s fascinating history. The issues that emerge reveal not only a great deal about the power of fascism, but also the ease with which dictatorship so easily took hold in a country weakened by war and a continent mired in chaos and desperate for peace.

Drawing on a wealth of archival material, some newly released, along with memoirs and personal papers, Mussolini’s Daughter paints a portrait of a woman in her twenties whose sheer force of character and ruthless narcissism helped impose a brutal and vulgar movement on a pliable and complicit society. Yet as Moorehead shows, not even Edda’s colossal willpower, her scheming, nor her father’s avowed love could save her husband from Mussolini’s brutal vengeance.

As she did in her Resistance Quartet, Moorehead delves deep into the past, exploring what fascism felt like to those living under it, how it blossomed and grew, and how fascists and aristocrats joined forces to pursue ten years of extravagance, amorality, and excessive luxury—greed, excess, and ambition that set the world on fire. The result is a powerful portrait of a young woman who played a key role in one of the most terrifying and violent periods in human history.

“A necessary book. . . . Compelling and moving. . . . The literature of wartime France and the Holocaust is by now so vast as to confound the imagination, but when a book as good as this comes along, we are reminded that there is always room for something new.” — Washington Post on A Train in Winter

“Le Chambon has long been mythologized in France for the actions of its inhabitants…. But, as this riveting history shows, the story is more complex... If the picture Moorhead paints is messier than the myth, this only serves to enhance the heroism of the main actors.” — The New Yorker on Village of Secrets

“An intimate family portrait. . . . Moorehead has done us a great service in restoring the humanity of the Rosselli family. . . . It’s the most complete portrait we have in English of this extraordinary family fighting—each in his or her own way—the most pernicious ideology of the last century.” — New York Times Book Review on A Bold and Dangerous Family