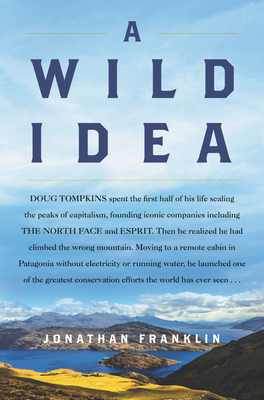 In 1991, Doug Tompkins abandoned his comfortable life in San Francisco and flew 6,500 miles south to a shack in Patagonia. Instead of the Golden Gate Bridge, Tompkins stared out the window at Volcano Michinmahuida, blanketed in snow and prowled by mountain lions. Shielded by waterfalls and wilderness, the founder of such groundbreaking companies as Esprit and The North Face suddenly regretted the corporate capitalism from which he had profited from years. As a CEO he had caused much pollution and, “made things nobody needed.” Now, he declared, it was time to reverse the damage to the planet, and maybe even himself.

In A Wild Idea, award-winning journalist and bestselling author Jonathan Franklin tells the incredible true story of Douglas Tompkins, who became one of the primary founders of our modern conservation and land protection movement.

Could he protect this wild beauty? For the ensuing quarter century, that dream— that obsession—became his life. Only in death did it become his legacy.

Jonathan Franklin is an investigative journalist who has reported for the New York Times, Boston Globe, and The Guardian. A native of Massachusetts, he resides in Santiago, Chile, with his wife and seven daughters, but often lives off the grid when writing his books.

“A WILD IDEA is an empowering and insightful story of an unbelievable life! A crescendo of action punctuated with a powerful message...A motivating saga of brilliance and extreme endurance. A must read, it offers life-changing lessons in gratitude, humility and resilience.” — Theresa Longo, Actress

"A WILD IDEA is a primer for rewilding your own mind. Jonathan Franklin has written an epic. It’s a book about what really counts in life. Nature and beauty are fundamental. Doug Tompkins battled to stop the bad and start the good. Franklin shows how Doug did both — deliciously and wickedly well. You’ll learn how to beat 70 to 1 odds. Via sizzling stories, A WILD IDEA documents this man’s odyssey in such a way you will surely investigate your own worldview. Who are you?" — Randy Hayes, Founder Rainforest Action Network, Executive Director Foundation Earth

"A WILD IDEA is a rollicking good read about the on-the-edge life of mountaineer, entrepreneur and earth saver Doug Tompkins. This comprehensive but never dull recounting of the founder and co-founder of North Face and Esprit camping and clothing brands and his late life struggle to live on and protect millions of acres of the world’s most stunning lands in the face of fierce opposition is the stuff of modern legend. But Franklin’s A Wild Idea is no hagiography. In exposing Tompkins flaws; his obsessions, ego, obstinacy and extreme risk taking (he died in a kayak accident in 2015) Franklin also illustrates how imperfect humans, with the right life partners, can transform the world.   Tompkins greatest legacy may be in proving how in saving the earth we’re really saving ourselves. Read A WILD IDEA and you might get the idea that hope is still a viable option." — David Helvarg, author of The Golden Shore and Rescue Warriors

“Doug Tompkins was always in search of great adventures and as A WILD IDEA brilliantly shows, our trip to the Siberian wilderness was off the charts!” — Tom Brokaw, author The Greatest Generation, NBC News Anchor