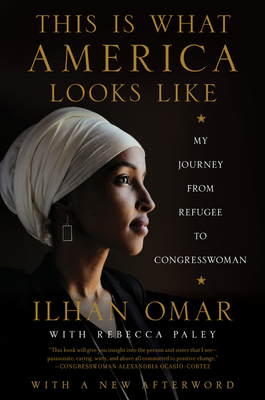 Named a Best Political Book of the Year by The Atlantic

“This Is What America Looks Like is the origin story of a leader who, finding no set path that would take a person like her to the places she wanted to go, was forced, and free, to chart her own.” –The New York Times Book Review

"Ilhan has been an inspiring figure well before her time in Congress. This book will give you insight into the person and sister that I see—passionate, caring, witty, and above all committed to positive change. It's an honor to serve alongside her in the fight for a more just world." —Congresswoman Alexandria Ocasio-Cortez

An intimate and rousing memoir by progressive trailblazer Ilhan Omar—the first African refugee, the first Somali-American, and one of the first Muslim women, elected to Congress.

Ilhan Omar was only eight years old when war broke out in Somalia. The youngest of seven children, her mother had died while Ilhan was still a little girl. She was being raised by her father and grandfather when armed gunmen attacked their compound and the family decided to flee Mogadishu. They ended up in a refugee camp in Kenya, where Ilhan says she came to understand the deep meaning of hunger and death. Four years later, after a painstaking vetting process, her family achieved refugee status and arrived in Arlington, Virginia.

Aged twelve, penniless, speaking only Somali and having missed out on years of schooling, Ilhan rolled up her sleeves, determined to find her American dream. Faced with the many challenges of being an immigrant and a refugee, she questioned stereotypes and built bridges with her classmates and in her community. In under two decades she became a grassroots organizer, graduated from college and was elected to congress with a record-breaking turnout by the people of Minnesota—ready to keep pushing boundaries and restore moral clarity in Washington D.C.

A beacon of positivity in dark times, Congresswoman Omar has weathered many political storms and yet maintained her signature grace, wit and love of country—all the while speaking up for her beliefs. Similarly, in chronicling her remarkable personal journey, Ilhan is both lyrical and unsentimental, and her irrepressible spirit, patriotism, friendship and faith are visible on every page. As a result, This is What America Looks Like is both the inspiring coming of age story of a refugee and a multidimensional tale of the hopes and aspirations, disappointments and failures, successes, sacrifices and surprises, of a devoted public servant with unshakable faith in the promise of America.

Ilhan Omar is the first Somali-American legislator in the United States and currently serves as the U.S. Representative for Minnesota’s 5th congressional district. In November 2018, she became one of the first two Muslim women elected to Congress, as well as the first woman of color to serve as U.S. Representative from Minnesota. Omar is a mother of three. She lives in Minneapolis and Washington, D.C.

“This Is What America Looks Like is the origin story of a leader who, finding no set path that would take a person like her to the places she wanted to go, was forced, and free, to chart her own.”  — New York Times Book Review

“Ilhan Omar has a quintessentially American story, told beautifully in the pages of this book. In the House, Ilhan is an eloquent spokesperson for her point of view.  I am grateful that her journey brought her to us.” — Speaker Nancy Pelosi

“This beautiful book is a glimpse into the life of a woman I admire, respect and love so fiercely. Ilhan, you reaffirm that we belong everywhere and so do our stories. Thank you for sharing yourself with the world and for the steadfast resolve you bring to the work of justice and the upliftment of community.”  — Congresswoman Ayanna Pressley

“This is What America Looks Like is centered on the lived experiences of my sister in service, Ilhan Omar. It is a powerful and inspirational story that demonstrates the need for representation in government that reflects the diversity of our nation.”  — Congresswoman Rashida Tlaib

“Omar is by turns fierce, self-deprecating, and confident, and . . . has produced a smoothly readable narrative. No matter a reader's personal politics, Omar's life should serve as an inspiration.” — Kirkus Reviews (starred review)

“Congresswoman Ilhan Omar is a fearless, pioneering badass with a titanium backbone, and her memoir is everything she is, in addition to being a rich, witty, crackling good read.” — Dave Eggers, author of The Monk of Mokha and The Captain and the Glory

"Omar renews my faith in America.  Her journey from refugee to politician is a story of courage, faith, and tenacity.  Ultimately, she inspires us to be more human.  The America I love looks like this."
— Sandra Cisneros, award-winning author of The House on Mango Street

"Ilhan has been an inspiring figure well before her time in Congress. This book will give you insight into the person and sister that I see—passionate, caring, witty, and above all committed to positive change. It’s an honor to serve alongside her in the fight for a more just world." — Congresswoman Alexandria Ocasio-Cortez

“Ilhan Omar has a gift for crossing all boundaries, from religious and cultural to political and personal. My world is bigger after reading This Is What America Looks Like. I recommend it.” — Gloria Steinem

“Rep. Ilhan Omar is not just pushing America to live up to its best ideals—she’s showing us how the struggle for inclusion and solidarity can transform our communities in the here and now. This book is a gripping, wonderfully frank account of a remarkable political journey that is just getting started. As dazzling as its author.” — Naomi Klein, author of On Fire: The Burning Case for the Green New Deal

“With every beautifully written page, we are given precious insights into the extraordinary experiences, struggles, and mercies that shaped the freedom fighter we know today. Omar has gifted us with a perfect memoir: reflective without being self-indulgent, intellectual but still passionate, pragmatic yet brimming with hope. After reading her story, even Omar’s biggest critics will be unable to deny her principled political commitments, visionary leadership, and profound love for the entire human family. During these trying political times, this book is a desperately needed reminder that the type of world, and leadership, that we deserve is closer than we think.”
— Marc Lamont Hill, New York Times bestselling author of Nobody: Casualties of America's War on the Vulnerable, From Ferguson to Flint and Beyond

"Ilhan Omar writes the quintessential American story of struggle, resilience, and transformation. This is What America Looks Like provides us a powerful and necessary voice during uncertain times." — Erika L. Sanchez, New York Times bestselling author of I Am Not Your Perfect Mexican Daughter

“A truly brave book from an extraordinary American. Any refugee or immigrant who consider the United States their adoptive home is fortunate to have Rep. Ilhan Omar as one of our country’s essential leaders.” — Jose Antonio Vargas, winner of the Pulitzer Prize and author of Dear America: Notes of an Undocumented Citizen