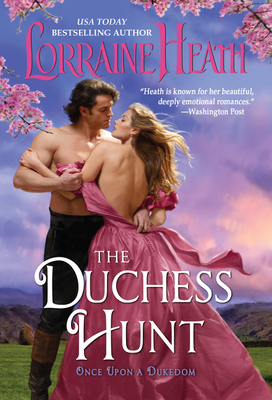 This is book number 2 in the Once Upon a Dukedom series.

One of Amazon’s Best Romances for October 2021

Hugh Brinsley-Norton, the Duke of Kingsland, is in need of a duchess. However, restoring the dukedom—left in ruins by his father—to its former glory demands all his time, with little room for sentiment. He places an advert encouraging the single ladies of the ton to write why they should be the one chosen, and leaves it to his efficient secretary to select his future wife.

If there exists a more unpleasant task in the world than deciding who is to marry the man you love, Penelope Pettypeace certainly can’t imagine what it might be. Still, she is determined to find the perfect bride for her clueless, yet ruthlessly charming employer.

But when an anonymous note threatens to reveal truths best hidden, Kingsland has no choice but to confront the danger with Penelope at his side. Beguiled by the strong-willed, courageous beauty, he realizes he’s willing to risk everything, including his heart, to keep her safe within his arms. Could it be the duchess he’s hunting for has been in front of him all along?

When multiple New York Times bestselling author Lorraine Heath received her BA degree in psychology from the University of Texas, she had no idea she had gained a foundation that would help her create believable characters—characters often described as “real people.” The daughter of a British beauty and a Texan stationed at RAF Bovingdon, Lorraine was born in England but soon after moved to Texas. Her dual nationality has given her a love for all things British and Texan, and she enjoys weaving both heritages through her stories.

“Heath opens her Once Upon a Dukedom series with a satisfying, character-driven Victorian romance... a promising spin-off.”
— Publishers Weekly (starred review) on Scoundrel of My Heart

“This Sins for All Seasons series finale is full of heart.”
— Kirkus Reviews on Beauty Tempts the Beast

“Heath concludes her Sins for All Seasons series...with a true treat of a Victorian romance... when Althea asks Beast for lessons in seduction, their already simmering chemistry comes to a boil. Heath may have saved the best for last.”
— Publishers Weekly on Beauty Tempts the Beast

"Heath has crafted a love story dedicated to the inherent romanticism of books; she understands the sensual, comforting, compassionate appeal of books, reading, and those that treasure them. The Earl Takes a Fancy possesses all her usual skill for devising romance, but more potently, it also celebrates a more deep-seated emotion and sense of connection familiar to any bookworm."
— Entertainment Weekly

“Heath launches a winning and steamy Victorian series... [she] builds a community of fascinating, intertwined characters that readers will be eager to get to know as they cheer for the driven hero and the spunky, smart heroine.”
— Publishers Weekly for Duchess in His Bed