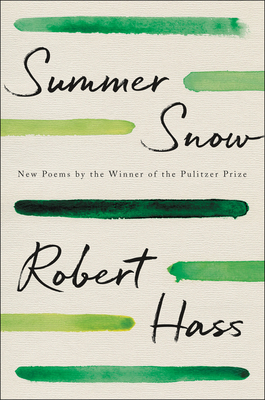 A new volume of poetry from Robert Hass is always an event. In Summer Snow, his first collection of poems since 2010, Hass further affirms his position as one of our most highly regarded living poets. Hass’s trademark careful attention to the natural world, his subtle humor, and the delicate but wide-ranging eye he casts on the human experience are fully on display in his masterful collection. Touching on subjects including the poignancy of loss, the serene and resonant beauty of nature, and the mutability of desire, Hass exhibits his virtuosic abilities, expansive intellect, and tremendous readability in one of his most ambitious and formally brilliant collections to date.

Robert Hass was born in San Francisco. His books of poetry include The Apple Trees at Olema (Ecco, 2010), Pulitzer Prize and National Book Award winner Time and Materials (Ecco, 2008), Sun Under Wood (Ecco, 1996), Human Wishes (1989), Praise (1979), and Field Guide (1973), which was selected by Stanley Kunitz for the Yale Younger Poets Series. Hass also co-translated several volumes of poetry with Nobel Laureate Czeslaw Milosz and authored or edited several other volumes of translation, including Nobel Laureate Tomas Tranströmer's Selected Poems (2012) and The Essential Haiku: Versions of Basho, Buson, and Issa (1994). His essay collection Twentieth Century Pleasures: Prose on Poetry (1984) received the National Book Critics Circle Award. Hass served as Poet Laureate of the United States from 1995 to 1997 and as Chancellor of the Academy of American Poets. He lives in California with his wife, poet Brenda Hillman, and teaches at the University of California, Berkeley.

"Hass personalizes everything, warms everything up. He’s an open book; but he’s also someone whom readers should, in every sense of the phrase, keep their eye on." — New Yorker