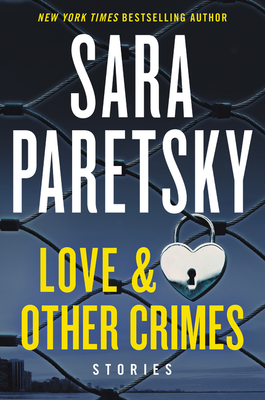 Hailed by P. D. James as “the most remarkable” of modern crime writers, Sara Paretsky is the New York Times bestselling author of twenty-two novels, including the renowned V.I. Warshawski series. She is one of only four living writers to have received both the Grand Master Award from the Mystery Writers of America and the Cartier Diamond Dagger from the Crime Writers Association of Great Britain. She lives in Chicago.

"A crime-fiction pro struts her stuff with short works featuring V.I. Warshawski, her prickly, stalwart Chicago PI, plus several homages to detectives past. Murder binds these wonderfully varied tales, but so does love—including that of a girl for a lab mouse she is determined to save." — People on Love & Other Crimes

"Paretsky shows she’s as superior a writer of the short-form crime story as she is of the novel in this consistently entertaining collection." — Washington Post on Love & Other Crimes

"The well-wrought plots and densely imagined worlds make this the most distinguished mystery collection so far this year." — Kirkus (starred review) on Love & Other Crimes

"Paretsky continues to thrill . . . In addition to heart-pounding crime fighting and sleuthing, these stories run deep with aching sketches of love and loss. Some contain scathing political commentary, with haunting versions of possible futures. Fans of witty characters, complicated plots, stories with somber endings, and, of course, V.I Warshawski will enjoy this book." — Library Journal on Love & Other Crimes

"The love that really comes through in each story is the love and empathy Paretsky has for her all-too-human characters." — Publishers Weekly on Love & Other Crimes

“Wonderful company and a rich discovery awaiting those who have yet to meet [Warshawski]. ” — Los Angeles Times

“Sara Paretsky reigns as one of the all-time greats.” — Karin Slaughter

“As long as Paretsky’s hotheaded, quick-witted sleuth is on the job, imperiled young women . . . will always have a champion.” — New York Times Book Review

“I’m a fanboy . . . When I was teaching myself to write thrillers, I closely studied Sara Paretsky’s detective V. I. Warshawski.” — John Sandford

“Legendary V.I. Warshawski is as dogged and ferocious as ever. So is Sara Paretsky, who is at the top of her crime novel game.” — C.J. Box

“Writing advance praise for Sara Paretsky is like writing a job recommendation for Bill Gates. Paretsky is the gold standard for novels dealing with crime and its consequences.” — Charlaine Harris