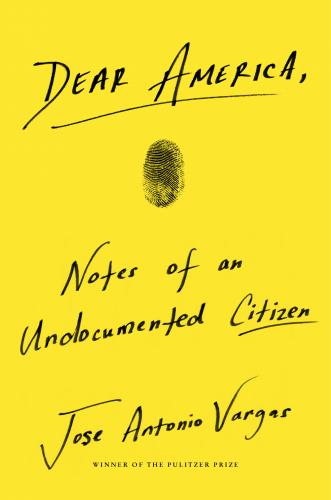 He’s been awarded the Pulitzer Prize for journalism. He’s an esteemed filmmaker and founder of the media non-profit, Define America. At great personal risk, Jose Antonio Vargas told the world that he was brought here from the Philippines at age 12 as an undocumented immigrant and that he now faces deportation. Dear America is riveting and courageous. I was taken by the gentility and humor that Vargas brings to the telling of his own experience and how, without preaching, he illuminates the lives of the undocumented. Our country is fortunate to have such a citizen.  —Elaine

“This riveting, courageous memoir ought to be mandatory reading for every American.”  —Michelle Alexander, New York Times bestselling author of The New Jim Crow

“l cried reading this book, realizing more fully what my parents endured.” —Amy Tan, New York Times bestselling author of The Joy Luck Club and Where the Past Begins

“This book couldn’t be more timely and more necessary.” —Dave Eggers, New York Times bestselling author of What Is the What and The Monk of Mokha

Pulitzer-Prize winning journalist Jose Antonio Vargas, called “the most famous undocumented immigrant in America,” tackles one of the defining issues of our time in this explosive and deeply personal call to arms.

After 25 years of living illegally in a country that does not consider me one of its own, this book is the closest thing I have to freedom.”

Jose Antonio Vargas is a Pulitzer Prize-winning journalist, Emmy-nominated filmmaker, and Tony-nominated producer. His work has appeared internationally in Time magazine, as well as in the San Francisco Chronicle, The New Yorker, and the Washington Post. In 2014, he received the Freedom to Write Award from PEN Center USA. A leading voice for the human rights of immigrants, he founded the non-profit media and culture organization Define American, named one of the World’s Most Innovative Companies by Fast Company. An elementary school named after him will open in his hometown of Mountain View, California in 2019.

“An engaging read, and a deeply moving memoir of coming of age with the odds stacked against you and not only forging a remarkable life for yourself, but becoming a voice for transformation and cultural change.”
— San Francisco Chronicle

“The moments when Vargas describes how profoundly alienated he feels from his own family ate the most candid and crushing parts of the book....Dear America is a potent rejoinder to those who tell Vargas he’s supposed to ‘get in line’ for citizenship, as if there were a line instead og a confounding jumble of vague statues and executive orders.”
— New York Times

“In Dear America, we get to know a young Vargas who was constantly told to stay in the shadows but whose tenacity and devotion had other plans for him.”
— Los Angeles Magazine

“[Dear America] is the voice of one man balancing between the poles of his identity. No matter one’s status, that’s something everyone can relate to.”
— Providence Journal

“A thought-provoking, moving, and highly personal memoir of Vargas’s struggle to belong. Recommended for all readers interested in immigration issues and American identity.”
— Library Journal

“Excruciatingly timely. . . .Vargas’ frank and fearless voice thoughtfully and intentionally challenges readers to confront the call for action at the heart of this book; the urgent need for “a new language around migration and the meaning of citizenship.”
— Booklist (starred review)

“A clarion call for humanity in a time of unprecedented focus on the 11 million people living in America without a clear path to citizenship. Vargas writes passionately about the undeniable intersection between race, class, and immigration and traces the bitter history of American immigratin policy.”
— BookPage

“Jose Antonio Vargas’s eloquent and emotional book bears witness to a basic truth: we should not be defined by our legal status, but by who we are...His voice is an important voice that needs to be heard by all Americans, whether they are Americans by birth or by choice.”
— Sheryl Sandberg, #1 New York Times bestselling author of Option B and Lean In