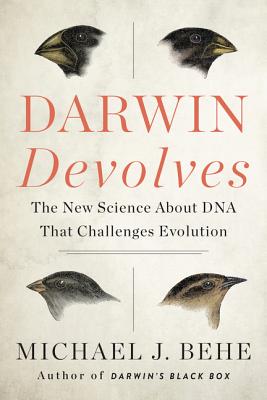 The scientist who has been dubbed the “Father of Intelligent Design” and author of the groundbreaking book Darwin’s Black Box contends that recent scientific discoveries further disprove Darwinism and strengthen the case for an intelligent creator.

In his controversial bestseller Darwin’s Black Box, biochemist Michael Behe challenged Darwin’s theory of evolution, arguing that science itself has proven that intelligent design is a better explanation for the origin of life. In Darwin Devolves, Behe advances his argument, presenting new research that offers a startling reconsideration of how Darwin’s mechanism works, weakening the theory’s validity even more.

A system of natural selection acting on random mutation, evolution can help make something look and act differently. But evolution never creates something organically. Behe contends that Darwinism actually works by a process of devolution—damaging cells in DNA in order to create something new at the lowest biological levels. This is important, he makes clear, because it shows the Darwinian process cannot explain the creation of life itself. “A process that so easily tears down sophisticated machinery is not one which will build complex, functional systems,” he writes.

MICHAEL BEHE is a biochemist, intelligent design advocate, and author of Darwin’s Black Box and Edge of Evolution. He is a professor of biochemistry at Lehigh University, and a founding Senior Fellow of Discovery Institute’s Center for Science and Culture.

“I highly recommend this book to both proponents and skeptics of Darwinian evolution as it will open new avenues of thought and creativity regarding this important subject.” — Russell Carlson, professor emeritus of biochemistry and molecular biology at the University of Georgia

“Behe’s latest masterpiece takes the evidence marshaled in defense of the unbounded power of blind evolution and deftly brings it to the opposite conclusion: evolution is self-limiting by design. Time for the Behe-bashers to retire.” — Douglas Axe, director of Biologic Institute and author of Undeniable

“Behe introduces new molecular-level facts that sink the Darwinian view of life once and for all: Darwinian mechanism sometimes helps survival of an organism but always by damaging or breaking genes. The conclusion is clear: life is the product of a mind.” — Matti Leisola, DSc, professor emeritus of bioprocess engineering at Aalto University, Finland

“Michael Behe has been keeping committed Darwinists awake nights for years. Built on solid science, it’s going to be harder than ever for critics to spit it out just because they don’t like its taste. Darwin Devolves is going to cause a lot more sleepless nights.” — The Stream