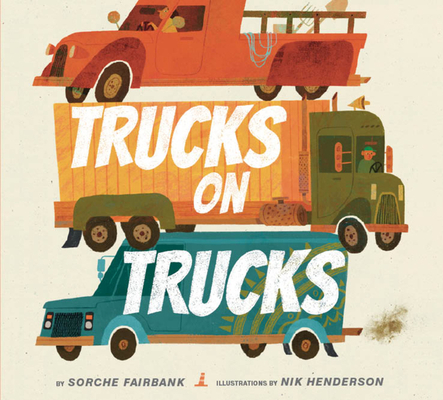 What’s better than a truck? A truck on top of another truck! Trucks on Trucks hits the highways and the byways while exploring basic concepts such as size, shape, color, numbers, and professions. A wonderful choice for children who love vehicles vehicles and books such as Donald Crews’s Truck and Freight Train, and Alice Schertle and Jill McElmurry’s Little Blue Truck.

Sorche Fairbank lives outside of Boston, Massachusetts, and in New York’s Hudson Valley. While the first picture books she ever loved tended to involve animals (church mice, an elephant king, circus koalas, a pig with a talking bone), her nephews’ passion for stories about trucks won her over. Trucks on Trucks is her first picture book.

Nik Henderson was raised in Strafford, Missouri, where he still lives, and studied illustration at the Savannah College of Art and Design in Savannah, Georgia. When he was little, he was convinced that his father’s Toyota Tacoma was a monster truck. Trucks on Trucks is his first book.

"The power of varied repetition hooks even readers who aren’t truck aficionados in a title that initially seems as literal as they come . . . But the arrival of less commonplace fare—a pink vehicle sporting painted daisies, and a green truck interacting with nothing at all—raises questions about what combination will turn up next. . . . [Will] draw plenty of laughs.” — Publishers Weekly