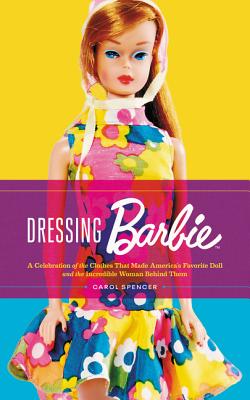 By Carol Spencer
$35.00
Email or call for price

If you've ever had a Barbie doll, or you know someone who did, chances are that Barbie was dressed in one of the thousands of designs created by Carol Spencer during her unparalleled reign as a Barbie fashion designer spanning more than thirty-five years. Published in commemoration of Barbie’s sixtieth anniversary, Dressing Barbie is a dazzling celebration of the clothes that made America’s favorite doll and the incredible woman behind them.

Illustrated with more than 100 full-color photographs, including many never-before-seen images of rare and one-of-a-kind pieces from Spencer’s private archive, Dressing Barbie is a treasure trove of some of the best and most iconic Barbie looks from the early 1960s until the late 1990s. Along with behind-the-scenes stories of how these designs came to be, Spencer reminisces about her thrilling time at Mattel working with legendary figures such as Ruth Handler, Barbie’s creator, and Charlotte Johnson, the original Barbie designer, for a full, insider look into life with the beloved doll.

Over the course of her career, Spencer won many accolades. She was the first designer to have her signature on the doll, the first to go on a signing tour, the first to design a limited-edition Barbie Doll for collectors, and the designer of the biggest selling Barbie of all time. Now, she is the first member of the inner circle to reveal the fashion world of the quintessential California girl as never before.

Carol Spencer worked for several years as a fashion designer and illustrator in the apparel industry before beginning her illustrious career at Mattel as a fashion designer for Barbie in 1963. For thirty-five years, Carol created thousands of designs for the iconic doll and watched as Mattel grew from a small business into a multi-national conglomerate. From seeing Paris fashion shows to running the Hong Kong design group in the 1980s, Carol has been around the world with Barbie. Since retiring in 1998, she has continued to reside in Los Angeles with her impressive personal collection of Barbie dolls.