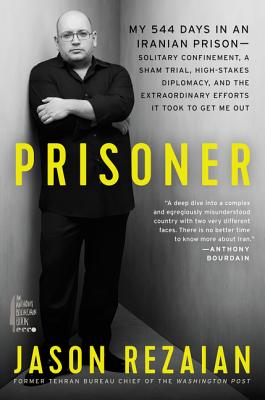 By Jason Rezaian
for information about purchasing this book, please contact orders@bookpassage.com

Jason Rezaian grew up in Marin County where his his parents were highly respected members of the community. In 2014, when Jason was the Tehran Bureau Chief for the Washington Post, Jason and his wife, journalist Yeganeh Saleh, were arrested (or, you might say, abducted) by Iranian authorities. Yeganeh was released, but Jason was imprisoned for almost 2 years. The subtitle on the book jacket tells the grim story: “Solitary Confinement, a Sham Trial, High-Stakes Diplomacy, and the Extraordinary Efforts It Took to Get Me Out.” At a time when journalists are threatened both verbally and physically in so many countries, Jason Rezaian’s story is crucially important. Thanks to the constant work of friends and family, Secretary of State, John Kerry finally was able to negotiate Jason’s release as part of the nuclear treaty.  —Elaine

The Inspiration for the New Podcast Featuring Jason Rezaian. “544 Days” is a Spotify original podcast, produced by Gimlet, Crooked Media and A24.

In July 2014, Washington Post Tehran bureau chief Jason Rezaian was arrested by Iranian police, accused of spying for America. The charges were absurd. Rezaian’s reporting was a mix of human interest stories and political analysis. He had even served as a guide for Anthony Bourdain’s Parts Unknown. Initially, Rezaian thought the whole thing was a terrible misunderstanding, but soon realized that it was much more dire as it became an eighteen-month prison stint with impossibly high diplomatic stakes.

While in prison, Rezaian had tireless advocates working on his behalf. His brother lobbied political heavyweights including John Kerry and Barack Obama and started a social media campaign—#FreeJason—while Jason’s wife navigated the red tape of the Iranian security apparatus, all while the courts used Rezaian as a bargaining chip in negotiations for the Iran nuclear deal.

In Prisoner, Rezaian writes of his exhausting interrogations and farcical trial. He also reflects on his idyllic childhood in Northern California and his bond with his Iranian father, a rug merchant; how his teacher Christopher Hitchens inspired him to pursue journalism; and his life-changing decision to move to Tehran, where his career took off and he met his wife. Written with wit, humor, and grace, Prisoner brings to life a fascinating, maddening culture in all its complexity.

“An important story. Harrowing, and suspenseful, yes—but it’s also a deep dive into a complex and egregiously misunderstood country with two very different faces. There is no better time to know more about Iran—and Jason Rezaian has seen both of those faces.”  — Anthony Bourdain

“Jason paid a deep price in defense of journalism and his story proves that not everyone who defends freedom carries a gun, some carry a pen.” —John F. Kerry, 68th Secretary of State

Jason Rezaian served as Tehran bureau chief for the Washington Post and is now an opinion writer for the paper and contributor to CNN. He was convicted—but never sentenced—of espionage in a closed-door trial in Iran in 2015. He lives in Washington, DC, with his wife.

“A deeply personal account of one journalist’s determination to find and report the truth, his fervent commitment to a free press, and his even more profound love for the family from whom he was separated.” — John F. Kerry, 68th Secretary of State

“An important story. Harrowing, and suspenseful, yes—but it’s also a deep dive into a complex and egregiously misunderstood country with two very different faces. There is no better time to know more about Iran—and Jason Rezaian has seen both of those faces.” — Anthony Bourdain

“Reading this book opened my eyes to how unfairly he had been treated by the Iranian government and how love, humor and resilience got him through. This book is a reminder of the people who sacrifice their freedoms and their lives to bring us the truth.” — Maz Jobrani

“Jason Rezaian is an American hero. For lots of reasons. For always using his work to speak truth to power. For speaking truth to power even when it compromises his safety and well being. And for going through everything he has gone through and still being able to unspool his tale in such a way that you feel like you just sat next to the most interesting guy in the bar. Prisoner is a primer on Iran, American politics, journalism, and hope, when we as a country need all those things in maximum doses.”  — W. Kamau Bell

"...As powerful and memorable a memoir as you’ll read this year." — Crimereads.com

"...More than just a memoir that reads like a thriller. It's also an intimate family history, an anguished love letter to an ancient and broken homeland, and a spirited defense of journalism and truth at a time when both are under attack almost everywhere." — New York Times Book Review

"It is Rezaian’s descriptions of the way the Iranian regime operates at the working level — its twisted logic and paranoia — that make the book so worthwhile." — Washington Post

"Prisoner is Rezaian's story of his arrest, imprisonment, trial and eventual release after 15 months. It's also a revealing account of his childhood, family and marriage. Perhaps mirroring how he was left to his thoughts in prison, the narrative is digressive, jumping back and forth to different periods of his life. And it works...Rezaian is unsparingly intimate throughout."
— NPR.org