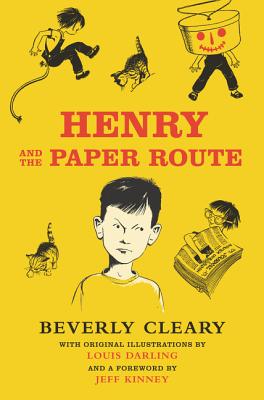 This special edition of Henry and the Paper Route features the original illustrations by Louis Darling—the first artist to ever render Henry, Ribsy, Ramona, and Beezus—as well as a foreword written by the New York Times bestselling author and illustrator of the Wimpy Kid series, Jeff Kinney.

All the older kids work their own paper route, but because Henry is not quite eleven yet, Mr. Capper won’t let him. Desperate to change his dad's mind, Henry tries everything he can think of to show he’s mature and responsible enough for the job. From offering free kittens to new subscribers, to hauling hundreds of pounds of old magazines for his school’s paper drive, there’s nothing Henry won’t try.

But it just might turn out to be the irrepressible Ramona Quimby who shows Mr. Capper how capable Henry is.

Louis Darling was an illustrator, writer, and environmentalist who was born and lived most of his life in Connecticut. His illustrations filled the pages of Beverly Cleary’s books until his death in 1970. His work is celebrated and immortalized by generations of fans.