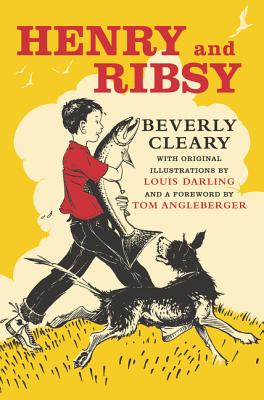 This is book number 3 in the Henry Huggins series.

This special edition of Henry and Ribsy features the original illustrations by Louis Darling—the first artist to ever render Henry, Ribsy, Ramona, and Beezus—as well as a foreword written by the New York Times bestselling author and illustrator of the Origami Yoda series, Tom Angelberger.

In this humorous and heartfelt novel from Newbery Medal-winning author Beverly Cleary, the bond between a boy and his dog proves unbreakable, as Henry vows to stick up for Ribsy…even if he is a troublemaker!

From the first moment Henry found Ribsy, the curious mutt was poking his nose into things he shouldn’t be. Whether terrorizing the garbage man, chasing cats, or gobbling Ramona Quimby’s ice cream cone, Henry’s four-legged pal has walked himself into one problem too many. So when Henry asks his dad if his pup can join them on the big fishing trip, Mr. Huggins agrees, but on one condition: Ribsy must stay out of mischief for two whole months.

Henry is confident in his loyal dog—until Ribsy goes overboard with his appetite for chaos…literally!

Louis Darling was an illustrator, writer, and environmentalist who was born and lived most of his life in Connecticut. His illustrations filled the pages of Beverly Cleary’s books until his death in 1970. His work is celebrated and immortalized by generations of fans.