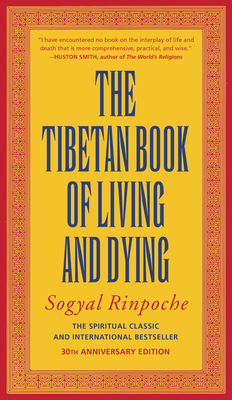 “A magnificent achievement. In its power to touch the heart, to awaken consciousness, [The Tibetan Book of Living and Dying] is an inestimable gift.”
—San Francisco Chronicle

A newly revised and updated 25th Anniversary edition of the internationally bestselling spiritual classic, The Tibetan Book of Living and Dying, written by Sogyal Rinpoche, is the ultimate introduction to Tibetan Buddhist wisdom. An enlightening, inspiring, and comforting manual for life and death that the New York Times calls, “The Tibetan equivalent of [Dante’s] The Divine Comedy,” this is the essential work that moved Huston Smith, author of The World’s Religions, to proclaim, “I have encountered no book on the interplay of life and death that is more comprehensive, practical, and wise.”

Sogyal Rinpoche was born in Tibet and raised by one of the most revered spiritual masters of this century, Jamyang Khyentse Chökyi Lodrö. With the Chinese occu-pation of Tibet, he went into exile with his master, who died in 1959 in Sikkim in the Himalayas. After university studies in Delhi and Cambridge, England, he acted as translator and aide to several leading Tibetan masters, and began teaching in the West in 1974. Rinpoche sees his life's task as transplanting the wisdom of the Buddha to the West by offering training in the vision set out in The Tibetan Book of Living and Dying. This training can enable those who follow it to understand, embody, and integrate Buddhist teachings into their everyday lives.

Rinpoche's reputation as an authority on the teachings associated with The Tibetan Book of Living and Dying and his dialogue with leading figures in the fields of psychology, science, and healing make him a sought-after speaker at international conferences and lectures. He travels extensively, teaching in North America, Europe, Australia, and Asia, and is the founder and spiritual director of Rigpa, a network of Buddhist centers and groups around the world.