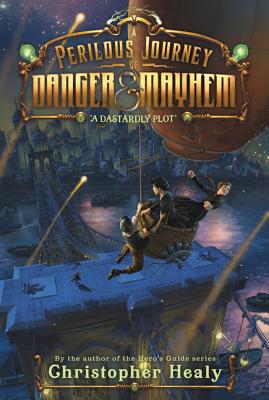 This is book number 1 in the Perilous Journey of Danger and Mayhem series.

A rip-roaring, hilarious alternate-history adventure starring the world’s most famous inventors—and its most forgotten. From the author of the beloved Hero’s Guide series, Christopher Healy.

It's 1883—the Age of Invention! A time when great men like Thomas Edison, Alexander Graham Bell, Nicola Tesla, and George Eastman work to turn the country into a land of limitless opportunity.

And it all happens at the world famous Inventor’s Guild headquarters in New York City—a place where a great idea, a lot of hard work, and a little bit of luck can find you rubbing elbows with these gods of industry who will usher humanity into the future.

Unless, of course, you’re a woman.

Molly Pepper, daughter of brilliant but unknown inventor Cassandra Pepper, lives with her mother in New York. By day, they make ends meet running a pickle shop; but by night, they toil and dream of Cassandra taking her place among the most famous inventors in America.

In an attempt to find a way to exhibit Cass’s work at the World’s Fair, they break into the Inventor's Guild, where they discover a mysterious plot to destroy New York.

The evidence points to the involvement of one of the world’s most famous inventors, and now it’s up to Molly, Cassandra, and a shop hand named Emmett Lee to uncover the truth—even if no one will ever know it was they who did it.

“Christopher Healy, author of the Hero’s Guide series, knows how to tell a good story. He’s done it again with the adventures of a determined girl named Molly Pepper.”—Brightly, Best Middle Grade Books of Fall 2018

Christopher Healy is the author of The Hero’s Guide to Saving Your Kingdom, a New York Times Book Review Editor’s Choice, as well as its two sequels, The Hero’s Guide to Storming the Castle and The Hero’s Guide to Being an Outlaw. Before becoming a writer, he worked as an actor, an ad copywriter, a toy store display designer, a fact-checker, a dishwasher, a journalist, a costume shop clothing stitcher, a children’s entertainment reviewer, and a haunted house zombie. He lives in New Jersey with his wife, two children, and a dog named Duncan. You can visit him online at www.christopherhealy.com.

“Plot twists and banter hit at breakneck speeds in this heartfelt yet tongue-in-cheek look at the tumultuous Age of Invention, and its focus on two often marginalized groups—immigrants and women—allows for relevant social commentary.”
— Publishers Weekly

“Healy has created a steampunk-inspired alternative history featuring some of the greatest minds in invention (including a number of women) in this series opener. A solid choice for adventurous readers.”
— Booklist

“Christopher Healy, author of the Hero’s Guide series knows how to tell a good story. He’s done it again with the adventures of a determined girl named Molly Pepper.”
— Brightly