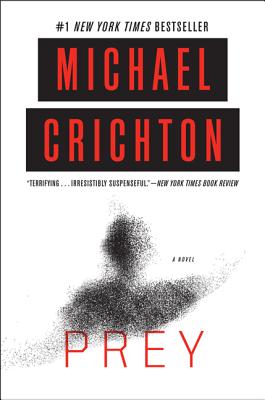 By Michael Crichton
for information about purchasing this book, please contact orders@bookpassage.com

Michael Crichton's Prey is a terrifying page-turner that masterfully combines a heart–pounding thriller with cutting-edge technology.

Deep in the Nevada desert, the Xymos Corporation has built a state-of-the-art fabrication plant, surrounded by miles and miles of nothing but cactus and coyotes. Eight people are trapped. A self-replicating swarm of predatory molecules is rapidly evolving outside the plant. Massed together, the molecules form an intelligent organism that is anything but benign. More powerful by the hour, it has targeted the eight scientists as prey. They must stop the swarm before it is too late…

“INTRICATE PLOTTING AND FLAWLESS PACING…you won’t be able to put it down.” — Time magazine

“This is how to write a thriller …Crichton’s latest page-turning triumph.” — Detroit Free Press

“Crichton has proved he knows how to ratchet up the fear factor.” — Denver Post

“…so god-awful scary and relentless, it’ll knock your head clear of whatever ails you.” — St. Petersburg Times

“Once again, Crichton has proved to be uncannily timely.” — St. Louis Post-Dispatch

“A cross between Jurassic Park and The Andromeda Strain….” — Columbus Dispatch

“A terrific novelist…He could make most readers lose sleep all night and call in sick the next day.” — San Francisco Chronicle

“Crichton is a doctor of suspense.” — Des Moines Sunday Register

“He is without peer.” — Chattanooga Times

“One of the great storytellers of our age…What an amazing imagination.” — New York Newsday

“Michael Crichton has written some of America’s most fantastic novels.” — Milwaukee Journal Sentinel