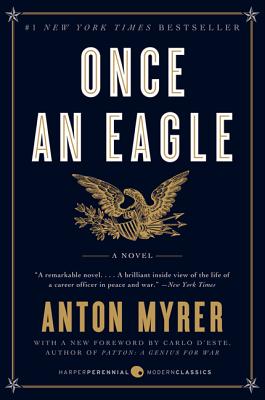 "A remarkable novel. . . utterly engrossing. . . . It is an astute study of the mind and character of a good general and a good man. And it is a brilliant inside view of the life of a career officer in peace and war."  — New York Times

“Simply the best work of fiction on leadership in print.” —General Martin E. Dempsey, 18th Chairman of the Joint Chiefs of Staff

Required reading for West Point and Marine Corps cadets, Once An Eagle is the story of one special man, a soldier named Sam Damon, and his adversary over a lifetime, fellow officer Courtney Massengale. Damon is a professional who puts duty, honor, and the men he commands above self-interest. Massengale, however, brilliantly advances by making the right connections behind the lines and in Washington's corridors of power. Beginning in the French countryside during the Great War, the conflict between these adversaries solidifies in the isolated garrison life marking peacetime, intensifies in the deadly Pacific jungles of World War II, and reaches its treacherous conclusion in the last major battleground of the Cold War—Vietnam.

Now with a new foreword by acclaimed historian Carlo D'Este, here is an unforgettable story of a man who embodies the best in our nation—and in us all.

While attending Harvard University, Anton Myrer (1922-1996) enlisted in the U.S. Marine Corps immediately after the Pearl Harbor attacks. He served for three years during World War II until he was wounded in the Pacific. He is also the author of the novels The Big War, The Last Convertible, and A Green Desire.

“Simply the best work of fiction on leadership in print. It challenges us to think about what motivates us. It reminds us of the great cost of conflict, of what is best in human nature, and of our potential vulnerabilities in leading America’s sons and daughters in battle. Our choice is not to be Sam Damon or Courtney Massengale but rather to realize that we must be ourselves. It is in this knowledge that our real commitment to our profession—and to leadership—begins.” — General Martin E. Dempsey, Chairman of the Joint Chiefs of Staff

“An ambitious, magnificently vivid novel...compelling. The battle scenes are among the finest I have ever read.” — The Atlantic

“Myrer was an excellent storyteller...Once An Eagle is that very rare thing, a genuine ideological novel. When one of these becomes standard issue to the Corps of Cadets we would be remiss if we ignored it.” — New York Review of Books

“I fully understand why Once An Eagle has become a classic novel of war and warriors. Sam Damon doesn’t preach, he lives his values and they are universal not only military.” — General H. Norman Schwarzkopf, US Army Retired - Commander in Chief Desert Storm

“I would pick up Once An Eagle rather than Norman Mailer any day for a clue as to what is going on in Vietnam.” — Baltimore Sun

“A powerful, provocative and strongly-written novel...and an implied warning to the nation...One hopes that the Chiefs of Staff in Washington will read it with care.” — Cincinnati Enquirer

“A great generational story of our US military, warts and all.” — Senator John McCain

“Accurate and appealing. The most brilliant and moving description of men in battle I have read... Truly a great book.” — Hugh B. Hester - BG, U.S. Army

“At long last we have what critics have been saying was lost to modern novels—an honest-to-God hero...a natural.” — Harpers

“In ironic contrast, the story moves from jungle warfare to drawing rooms on the Potomac, and back again. . . . Goes to the heart of our century.” — Chicago Sun-Times

“Inspired me...the essence of being a good man, soldier, officer and leader...the standard, the pride, the motivation...We are all better men because of Anton Myrer.” — David L. Grange - BG, U.S. Army

“Never read anything that depicts army life and the battlefield with such deep appreciation...superb account.” — Eugene A. Salet - MG, U.S. Army

“Once An Eagle has been the literary moral compass for me and my family of soldiers for more than two generations. It’s ethical message is as fresh and relevant today as it was when Anton Myrer wrote it during the war in Vietnam.” — Robert H. Scales - MG, U.S. Army Commandant U.S. Army War College

“Once An Eagle is truly a classic. It caused us to reflect on core values...one of the key ingredients to the success we now enjoy. Sam Damon has been and will be a beacon of moral and physical courage for young American warriors.” — Henry H. Shelton - General, U.S. Army

“Once An Eagle may be America’s War and Peace and Anton Myrer a contemporary Tolstoy.” — Louisville Courier Journal

“Too overwhelming, too awe-inspiring to keep to yourself. . . magnificent,” — Philadelphia Bulletin

“It is my firm opinion that Anton Myrer’s Once An Eagle deserves to rank with, or perhaps above, any one of those three truly great pieces of military fiction—Stephen Crane’s The Red Badge of Courage; Fix Bayonets! by Col. John W. Thomason, USMC; and What Price Glory, by Capt. Lawrence Stallings, USMC.” — Armed Forces Journal

“Reflects skillful research in military areas as well as technical mastery of the writing craft...Through the gentle but courageous character of Damon, Myrer graphically describes the criminal, dirty, wasteful, savage immorality of war...The Army career man will look on it as a monument.” — Denver Post

“Ranks with Red Badge of Courage and All Quiet on the Western Front as time-tested epics of war and warriors. . . . The spirit, the heart and yes, the soul of the officer corps is captured, as are the intangible ambiance and nuances that make up the life of the American soldier and his family. . . . A consummate anti-war book. . . . Once An Eagle is both a perceptive study of the profession of arms and a chilling overview of armed conflict.” — John W. Vessey, Jr., General, US Army (Ret.)

“Required reading...at the Army War College...a classic of military literature and a guide to honorable conduct in the profession of arms.” — Douglas V. Johnson I - LTC, U.S. Army

“The author’s description of the military mind and muscle at work in combat and out are quite realistic...reading this book will be a great experience for those who haven’t experienced what the author writes about so colorfully.” — David M. Shoup - General, USMC

“The most outstanding novel I have seen in long years. And it is far and away the best work of fiction with a military background I have ever read.” — Journal of the Armed Forces