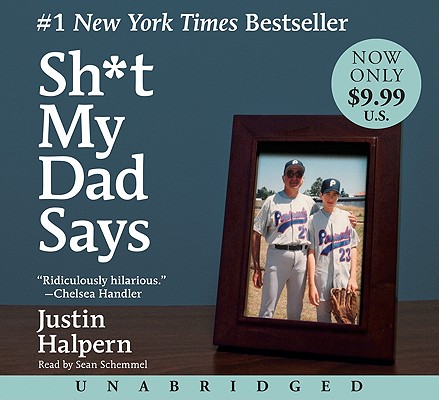 By Justin Halpern, Sean Schemmel (Read by)
for information about purchasing this book, please contact orders@bookpassage.com

After being dumped by his longtime girlfriend, twenty-eight-year-old Justin Halpern found himself living at home with his seventy-three-year-old dad. Sam Halpern, who is "like Socrates, but angrier, and with worse hair," has never minced words, and when Justin moved back home, he began to record all the ridiculous things his dad said to him:

"Do people your age know how to comb their hair? It looks like two squirrels crawled on their heads and started fucking."

Almost two million people now follow Mr. Halpern's philosophical musings on Twitter, and in this book, his son weaves a brilliantly funny, touching coming-of-age memoir around the best of his quotes. An all-American story that unfolds on the Little League field, in Denny's, during excruciating family road trips, and, most frequently, in the Halperns' kitchen over bowls of Grape-Nuts, Sh*t My Dad Says is a chaotic, hilarious, true portrait of a father-son relationship from a major new comic voice.

Justin Halpern is the author of the #1 New York Times bestseller Sh*t My Dad Says, inspired by his massively popular Twitter feed. SPOILER ALERT: He lives with his wife in Los Angeles.