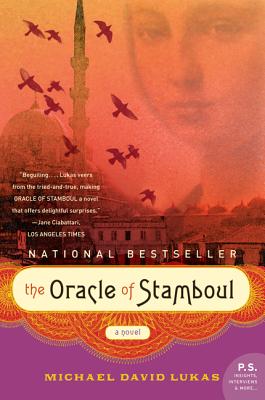 “This majestic debut follows Eleanora Cohen, an eight-year-old prodigy who, through a strange turn of events, leaves her life in Constanta and becomes an adviser to the Sultan. Lukas deftly evokes the sights, smells, sounds, and textures of 19th century Stamboul. The reader sees the world through the eyes of a small, precocious child as she negotiates with the larger forces of history. This is a stunning and thoroughly engaging read that will reach beyond the typical genre of historical fiction.”
— Rachel Marcus, Pegasus Downtown, Berkeley, CA

Set in the heart of the exotic Ottoman Empire during the first years of its chaotic decline, Michael David Lukas’ elegantly crafted, utterly enchanting debut novel follows a gifted young girl who dares to charm a sultan—and change the course of history, for the empire and the world. An enthralling literary adventure, perfect for readers entranced by the mixture of historical fiction and magical realism in Philip Pullman’s The Golden Compass, Orhan Pamuk’s My Name is Red, or Gabriel García Márquez’s One Hundred Years of Solitude, Lukas’ evocative tale of prophesy, intrigue, and courage unfolds with the subtlety of a Turkish mosaic and the powerful majesty of an epic for the ages.

MICHAEL DAVID LUKAS has been a Fulbright scholar in Turkey, a late-shift proofreader in Tel Aviv and a Rotary scholar in Tunisia. He is a graduate of Brown University and the University of Maryland, and his writing has been published in the Virginia Quarterly Review, Slate, National Geographic Traveler and the Georgia Review. Lukas lives in Oakland, California, less than a mile from where he was born. When he isn’t writing,he teaches creative writing to third- and fourth-graders. Visit him online at www.michaeldavidlukas.com.

“Lukas . . . brings a raconteur’s sense of storytelling, a traveler’s eye for color and a scholar’s sense of history to his first novel. . . . Lukas has given us a Turkish delight.”
— San Francisco Chronicle

“An enchanting, gorgeous read . . . Lukas captures the scents and sounds, the vivid beauty, the subtle intrigue and simultaneous naivety, of the Ottoman Empire unaware of its imminent demise.”
— Siobhan Fallon, author of You Know When the Men are Gone

“A stunning debut . . . Lukas has managed to create an instant classic that feels as if it should be retroactively slipped into the great libraries of the old world.”
— Reif Larsen, author of The Selected Works of T.S. Spivet

“A lyrical debut…A passionate novel that beautifully conveys the flavor of Turkish culture…focusing on the effect a young prodigy has on the political leaders of the time.”
— Kirkus Reviews

“This first novel by a promising young writer is both vivid historical fiction and a haunting fable.”
— Library Journal

“The Oracle of Stamboul is a delight, a gem of a first novel.”
— Read All Day

“THE ORACLE OF STAMBOUL is one of those debuts that defies the norm.”
— Bookreporter.com

“...this riveting debut novel not only captures the atmosphere of the exotic European crossroads but also introduces a young girl who is utterly captivating.”
— Bookloons.com

“A gem of a first novel…an appealing blend of magical and historical realism…This is a polished literary work that will appeal to a wide readership.”
— Cleveland Plain Dealer

“An enchanting literary debut…A charming tale of passion and intrigue…that could be read in one sitting, spine-tingling descriptions will transport readers to another place and time.”
— Today's Zaman