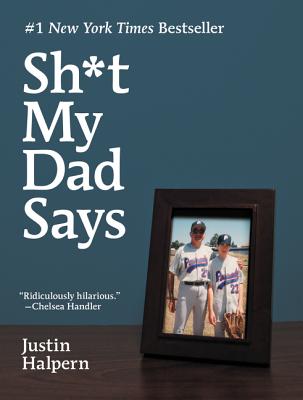 “This book is ridiculously hilarious, and makes my father look like a normal member of society.” —Chelsea Handler

Tuesdays with Morrie meets F My Life in this hilarious book about a son’s relationship with his foul-mouthed father by the comedy writer who created the massively popular Twitter feed of the same name.

A few months ago, comedy writer Justin Halpern, 29, found himself living at home with his 73-year-old father after being dumped by his longtime girlfriend. Sam Halpern had never minced words, and when Justin moved back home, he was smart enough to write down all the ridiculous things his dad said to him, like “The universe does not give a fuck about you. You are a speck in its shit,” and “The worst thing you can be is a liar....Okay fine, yes, the worst thing you can be is a Nazi, but THEN, number two is liar. Nazi 1, Liar 2,” and “Everybody loves that Da Vinci code book. Bullshit, it sucks. I read it. It’s for all the dummies.” These quotes, or philosophies, have become “Shit My Dad Says,” a Twitter page that in less than a month was being followed by over 500,000 people, had spawned articles in newspapers and magazines, as well as inspiring calls from movie and television producers, celebrities, and just about everyone else who heard about the site.

SH*T MY DAD SAYS, Justin Halpern’s first book, is a mix of his dad’s quotations and longer-form essays in the vein of David Sedaris and Chelsea Hander. It is a hilarious, unforgettable account of a unique father-son relationship and the filthy words of wisdom that have defined it.

Justin Halpern is the author of the #1 New York Times bestseller Sh*t My Dad Says, inspired by his massively popular Twitter feed. SPOILER ALERT: He lives with his wife in Los Angeles.

Sh*t My Dad Says is f______ great!...Very funny, very irreverent, very real. It’s refreshing at a time when we’re all choking to death on political correctness and can go for days without meeting a single person with common sense.” — Janet Evanovich, Time Magazine

“This book is ridiculously hilarious, and makes my father look like a normal member of society.” — Chelsea Handler

“A fun gift book that is bound to crack up anyone who flips through it.” — Los Angeles Times

“If you’re wondering if there is a real man behind the quotes on Twitter, the answer is a definite and laugh-out-loud yes.” — Christian Lander, New York Times bestselling author of Stuff White People Like

“Read this unless you’re allergic to laughing.” — Kristen Bell

“Justin Halpern tosses lightning bolts of laughter out of his pocket like he is shooting dice in a back alley. In one sweep of a paragraph, he ranges from hysterical to disgusting to touching—and does it all seamlessly. Sh*t My Dad Says is a really, really funny book.” — Laurie Notaro, New York Times bestselling author of The Idiot Girls’ Action-Adventure Club

“Justin Halpern’s dad is up there with Aristotle and Winston F*cking Churchill. He’s brilliant, and his son’s book is absolutely hilarious.” — A.J. Jacobs, New York Times bestselling author of The Know-It-All