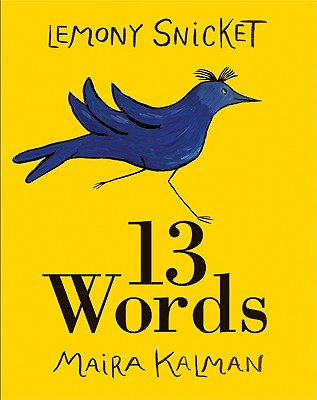 “Some years ago, I read an article that proposed that children didn't like to read because contemporary publishing trends had dumbed-down the language, making books boring. A child should certainly learn to understand words like 'dog' and 'frog,' but where were the words that enlivened the story and stretched the reader's imagination? Leave it to Lemony Snicket to create a children's picture book that celebrates not only 'dog' and 'cake' and 'goat,' but also words like 'haberdashery' and 'despondent' and 'panache!”
— Laura Hansen, Bookin' It, Little Falls, MN

Lemony Snicket had an unusual education which may or may not explain his ability to evade capture. He is the author of the 13 volumes in A Series of Unfortunate Events, several picture books including The Dark, and the books collectively titled All The Wrong Questions.

Maira Kalman is the illustrator of The Elements of Style by William Strunk Jr, the author of My Favorite Things, Principles of Uncertainty, and the bestselling And the Pursuit of Happiness, and the author/illustrator of numerous children's books. Her artwork has graced multiple covers of The New Yorker, and her watches, clocks, accessories, and paperweights have been featured at the Museum of Modern Art store. She lives in New York City.

Alex Kalman is a designer, curator, writer, and creative director. He is the founder, director, and a chief curator of Mmuseumm, a new type of museum described as "curatorial genius" by The Atlantic and "one of the top twelve hidden art gems in the world" by the New York Times T Magazine. He also published the very first ever Op-Object column in the New York Times. His artwork, films, installations, and exhibitions have been shown at the Museum of Modern Art, the Venice Architecture Biennale, and the Metropolitan Museum of Art. His latest project, Future Aleppo, was on exhibit at the Skirball Cultural Center in Los Angeles, and will open at the Victoria & Albert Museum in London in 2018. He lives in New York City.

“a winsome story of friendship--proceeds thus, with a Snicketian 13 words in all. Snicket and Kalman are perfectly matched here, both revelers in life’s delicious details and things best left unexplained. This charming chef-d’oeuvre sings like a mezzo-soprano. ”
— Kirkus Reviews (starred review)

“A book that pushes boundaries and demands such active participation on the part of both readers and listeners to connect language and images (and Kalman’s quirky artwork is a perfect fit, littered with fun details) is to be commended.”
— ALA Booklist