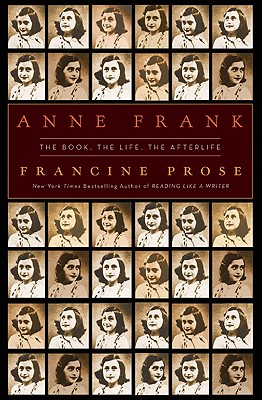 By Francine Prose
$24.99
Email or call for price

“A definitive, deeply moving inquiry into the life of the young, imperiled artist, and a masterful exegesis of Diary of a Young Girl…Extraordinary testimony to the power of literature and compassion” –Booklist (starred review)

In Anne Frank: The Book, the Life, the Afterlife, Francine Prose, author of Reading Like a Writer, deftly parses the artistry, ambition, and enduring influence of Anne Frank’s beloved classic, The Diary of a Young Girl. Approved by both the Anne Frank House Foundation in Amsterdam and the Anne Frank-Fonds in Basel, run by the Frank family, this work of literary criticism unravels the complex, fascinating story of the diary and effectively makes the case for it being a work of art from a precociously gifted writer.

“A lively and illuminating disquisition....an impressively far-reaching critical work, an elegant study both edifying and entertaining. In a book full of keen observations and fascinating disputes...Ms. Prose looks in all directions to find noteworthy material. . . . This is a Grade A example of what a smart, precise and impassioned teacher can do.” — Janet Maslin, New York Times

“Prose is clear-headed, tough, and fair, and her book, though in places immensely sad, is superb. It should be cherished alongside the masterpiece that inspired it.” — Boston Sunday Globe

“Prose admirably recreates the events in the attic over the years—no small feat—[with] all the drama of a classic whodunit…Transcendent criticism…[A] case so brilliantly proven.” — Chicago Tribune

“This is an amazing book…thorough, thoughtfully, beautifully written…[It] focuses on Anne Frank as an accomplished writer…I was thrilled to find it.” — Miami Herald

“Francine Prose. . . takes Anne’s story and adds to it a new perspective. . . . Prose tells this story with tremendous beauty, pathos and a profound awareness of tragic coincidence.” — San Francisco Chronicle

“Prose’s book is a stunning achievement. . . . Now Anne Frank stands before us. . . a figure who will live not only in history but also in the literature she aspired to create.” — Minneapolis Star Tribune

“Illuminating. . . . A compelling story…Francine Prose explains some of the many sides of this remarkable story.” — Washington Post

“Impassioned. . . compelling. . . . No one has made the case as convincingly and forcefully as Francine Prose does that Anne Frank aspired to be taken seriously as a writer—and should be.” — San Diego Union-Tribune

“A valuable resource…useful and well-written and –researched” — Philadelphia Inquirer

“Compelling. . . . With compassion and grace, Prose looks at Anne Frank as Anne wished to be seen: above all, as a writer.” — Christian Science Monitor

“Talented author Francine Prose approaches Anne Frank with the awe and respect of one writer for another…Prose’s research uncovers what many will be surprised to discover.” — Jerusalem Post

“Substantially researched and wide-ranging…This probing and informed book introduces readers to a far more complex and accomplished young woman than the Anne we met in our adolescence.” — Jewish Book World

“Prose takes the 21st-century reader deep inside Anne’s annex and invaded city, into the minds of those who have since laid claim to her legend, and into the heart of this committed young writer whose creative spirit lives on.” — O Magazine

“Prose is commanding and illuminating...definitive, deeply moving inquiry into the life of the young, imperiled artist.... Extraordinary testimony to the power of literature and compassion.” — Booklist (starred review)