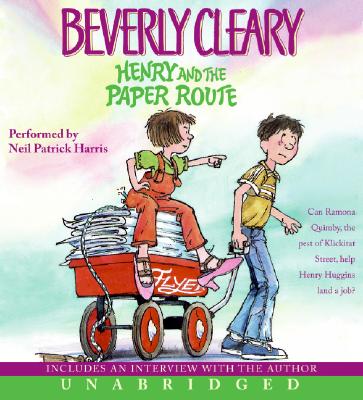 All the older kids work their own paper route, but because Henry is not eleven yet, Mr. Capper won't let him. Desperate to change his mind, Henry tries everything he can think of to show he's mature and responsible enough for the job. From offering free kittens to new subscribers, to hauling hundreds of pounds of old newspapers for his school's paper drive, there's nothing Henry won't try. But it might just be the irrepressible Ramona Quimby who shows Mr. Capper just how capable Henry is.

Neil Patrick Harris's stage credits include productions of Sweeney Todd, Romeo and Juliet, and Rent. On TV, he starred in Doogie Howser, M.D. and currently appears in How I Met Your Mother. His film work includes Clara's Heart, The Next Best Thing, and Starship Troopers.