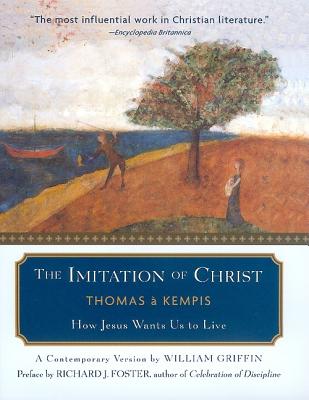 By Thomas A. Kempis
for information about purchasing this book, please contact orders@bookpassage.com

The Imitation of Christ is the work of at least three men: Gerard Groote, Florent Radewijns, and Thomas a Kempis. The first two were founders of the Brethren of the Common Life, a lay religious society that flourished in the Netherlands from the fourteenth to the sixteenth century. Working on their manuscripts, first as a compiler and editor and then as a coauthor, was Kempis.

So successful were Kempis's efforts that the work became the golden treasury not only of their community but also of the contemporary spirituality movement known as the Modern Devotion. Its prescriptions might very well be known as the Perennial Devotion for its continual appeal through the centuries.

In its fifteenth century Latin original the Imitation was not a silken cord of consecutive prose. Rather it was a series of scratchings, the sort that a spiritual director would note down in preparation for sermons and addresses. What wasn't always in the original was exactly how Kempis developed each topic sentence or wisdom quotation as he delivered it.

In this new rendition William Griffin recovers the original experience of listening to Kempis as he taught and preached to his spiritual charges. Using a variety of literary and historical means, Griffin enhances the original, making the insights of this seminal exposition of Christian life more accessible.

Thomas à Kempis (1379/80-1471) was a member of the Brethren, priest, Augustinian monk, author of a dozen books, and copyist extraordinaire. He lived at and was a member of the Windesheim congregation at Agneitenberg monastery in the Netherlands for more than seventy years.