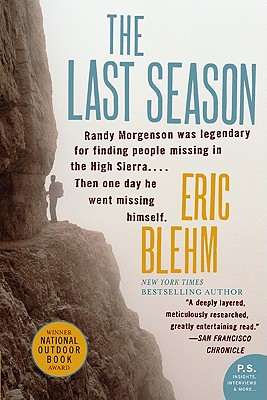 "As Jon Krakauer did with Into the Wild, Blehm turns a missing-man riddle into an insightful meditation on wilderness and the personal demons and angels that propel us into it alone.” — Outside magazine

Destined to become a classic of adventure literature, The Last Season examines the extraordinary life of legendary backcountry ranger Randy Morgenson and his mysterious disappearance in California's unforgiving Sierra Nevada—mountains as perilous as they are beautiful. Eric Blehm's masterful work is a gripping detective story interwoven with the riveting biography of a complicated, original, and wholly fascinating man.

Eric Blehm is the award-winning author of the New York Times bestsellers Fearless and The Only Thing Worth Dying For. His first book, The Last Season, was the winner of the National Outdoor Book Award and was named by Outside magazine as one of the "greatest adventure biographies ever written." He has dedicated his life to telling the stories of those who serve.

"As Jon Krakauer did with Into the Wild, Blehm turns a missing-man riddle into an insightful meditation on wilderness and the personal demons and angels that propel us into it alone.” — Outside magazine

“Blehm recounts the search for Morgenson with a thriller’s pacing. . . . A potent testament to the enduring power and allure of wild spaces. — Men's Journal

"Blehm, a snowboarder and journalist, deftly interweaves the story of Morgenson’s lifelong devotion to wilderness with a riveting account of the hunt for him." — National Geographic Adventure Magazine

“Some considered Morganson the Park Service’s best backcountry ranger, and when he went missing while on patrol in the summer of 1996, his friends were at first astonished, then suspicious. . . . Blehm ably evokes the world of seasonal backcountry rangers, whom the Park Service slights even as they put in long days protecting the land they manage and coming to the aid of backpackers in trouble.” — Washington Post Book World

“[A] compelling picture . . . of the pristine backcountry and the lonely, bittersweet lives of those charged with protecting it. . . . Well reported , and like the country in which it is set, it glows in serene places.” — Chicago Tribune

“A legendary tale of wilderness devotion.” — Aron Ralston, author of Between a Rock and a Hard Place

“This is a hell of a story, a tale of lost souls and human frailty and very real sadness, but it’s also a one-of-a-kind look into a truly rarefied American subculture, the specialized world of elite backcountry rangers--their ethics, their techniques, even the motivations that keep them deep in the woods, as the years turn into decades and life flows on by. I have a feeling Eric Blehm’s The Last Season is going to be around for a long time, earning a place in every home library devoted to the California wilderness experience.” — Daniel Duane, author of Caught Inside and El Capitan

“A mesmerizing tale of one man’s struggle for fidelity—to the woman with whom he enjoined his life, and to the wild world of which he was steward. How many of us have felt in our bones that pull between worlds and the passions they inspire; Blehm sinks our teeth right into the marrow of that conflict.” — Amy Irvine McHarg, wilderness activist and author

“Impeccably researched and compassionately told, The Last Season is a compelling story of one man’s passion and pain.” — Jennifer Jordan, author of Savage Summit: The True Stories of the First Five Women Who Climbed K2, the World's Most Feared Mountain

“A first-rate detective story but an even better love story—an account of the love for wild places.” — Bill McKibben, author The End of Nature

“A gripping account. . . . I couldn’t put it down.” — Jordan Fisher Smith, author of Nature Noir