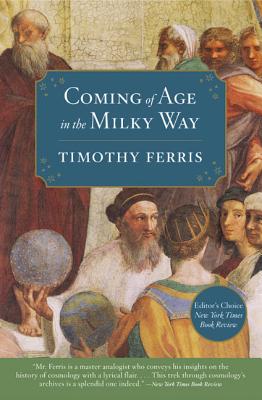 By Timothy Ferris
for information about purchasing this book, please contact orders@bookpassage.com

From the second-century celestial models of Ptolemy to modern-day research institutes and quantum theory, this classic book offers a breathtaking tour of astronomy and the brilliant, eccentric personalities who have shaped it. From the first time mankind had an inkling of the vast space that surrounds us, those who study the universe have had to struggle against political and religious preconceptions. They have included some of the most charismatic, courageous, and idiosyncratic thinkers of all time. In Coming of Age in the Milky Way, Timothy Ferris uses his unique blend of rigorous research and captivating narrative skill to draw us into the lives and minds of these extraordinary figures, creating a landmark work of scientific history.

Timothy Ferris's works include Seeing in the Dark, The Mind's Sky (both New York Times best books of the year), and The Whole Shebang (listed by American Scientist as one of the one hundred most influential books of the twentieth century). A fellow of the American Association for the Advancement of Science, Ferris has taught in five disciplines at four universities. He is an emeritus professor at the University of California, Berkeley and a former editor of Rolling Stone. His articles and essays have appeared in The New Yorker, Time, Newsweek, Vanity Fair, National Geographic, Scientific American, The Nation, The New Republic, The New York Review of Books, The New York Times Book Review, and many other publications. A contributor to CNN and National Public Radio, Ferris has made three prime-time PBS television specials: The Creation of the Universe, Life Beyond Earth, and Seeing in the Dark. He lives in San Francisco.