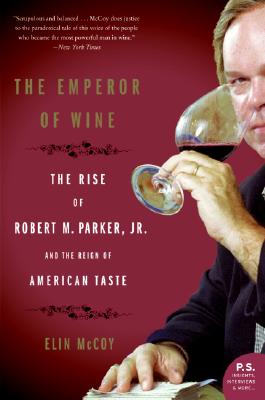 This is the story of how an American lawyer raised on Coca-Cola caused a revolution in the way wines around the globe are made, sold, and talked about.

The world's most influential wine critic, Robert M. Parker, Jr., has dominated the international wine community for the last quarter century, embodying the triumph of American taste. Using Parker's story as a springboard, author Elin McCoy offers an authoritative and unparalleled insider's view of the eccentric personalities, bitter feuds, controversies, and secrets of the wine world. She explains how reputations are made and how and why critics agree and disagree, and she tracks the startling ways wines are judged, promoted, made, and sold -- while painting a fascinating portrait of a modern-day cultural colossus who revolutionized the way the world thinks about wine.

Award-winning journalist and international wine judge Elin McCoy has chronicled the world of wine for thirty years. She is the wine and spirits columnist for Bloomberg Markets, and a longtime contributing editor at Food & Wine. Her writings have also appeared in the New York Times, House & Garden, and many other publications.

“A riveting morality tale for our time.” — Gerald Asher

“Emperor of Wine is a vibrant absorbing portrait...” — USA Today

“...an extraordinay exploration of the Parker phenomenon...impeccably researched…” — Decanter Magazine