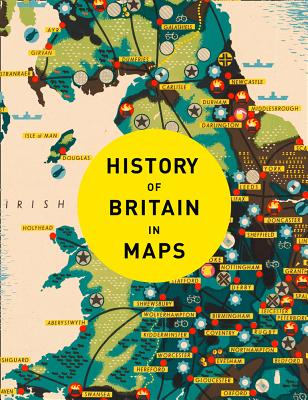 By Philip Parker
Out of Print

From Mappa Mundi to modern election maps, the United Kingdom has evolved rapidly, along with the ways in which it has been mapped. In this time, cartography has not only kept pace with these changes, but has often driven them. In this beautiful book, 100 maps give a visual representation of the history of Britain. See the establishment of Great Britain, the British Empire expand, the impact of World Wars and the latest statistical mapping. Maps include Rudge Cup (schematic map of western forts on Hadrian’s Wall), 2nd century AD; Matthew Paris map of the Anglian Heptarchy (Anglo-Saxon Kingdoms), c. 1250; Gough map of Britain, 1360; Cambriae Typus, first published map of Wales, 1573; Raven maps of the Ulster Plantations, 1622; Enclosure map (eg of Norfolk, c. 1800); Booth Poverty Map of London, 1886; Map of Beeching cuts to Britain’s railways, 1963; and Map of EU Referendum voting patterns, 2016.